The Shetland Sheepdog is a small, alert, rough-coated, longhaired working dog.  He must be sound, agile and sturdy.  The Shetland Sheepdog, better known as the Sheltie, is a "watch" dog, not a guard dog, nor is it visually frightening.  It will bark at intruders, but after giving warning, will either retreat for safety or escort them through the house.

Their natural temperament of being reserved with strangers should not be misinterpreted as shyness or timidity as some are wont to do at times.  Shelties make you earn their trust, but once it is given, they prove to be loyal and loving companions.

Because of its small size, the Sheltie is very adaptable to city living, as long as he is given proper exercise.  In lieu of a large fenced in yard where he can chase balls or catch a frisbee, daily walks are gratefully accepted.  Shelties are good with children and make delightful family companions.

The Sheltie has a double coat consisting of a harsh textured, longer outer coat and soft downy like undercoat.  There is the normal growth, shed and replacement cycle that needs a thorough brushing at least once weekly to control the amount of hair shed in the home.  Males generally do one major shed a year while intact females generally do major sheds two to three months after each season and of course after the birth of pups.

Sheltie coats come in a variety of colors. 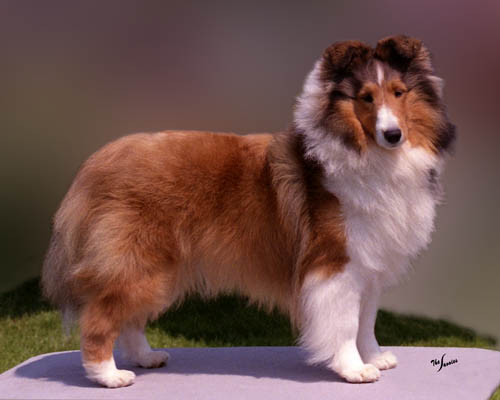 SABLES VARY IN COLOR FROM A LIGHT HONEY COLOR TO A DARK SHADED SABLE AND DARK MAHOGANY.  Often the confusion arises between sables and tricolors because of the many shades of sable.  A dark mahogany at times can look very "black" because of the darkness of the brown, but if you look closely, you can see the red/brown undercoat through the dark, almost black overcoat.  That combined with an almost black frill set against the white of a collar, makes people think it is a "tri" or three coloured dog.  However, a tricolor is a completely different colour altogether. 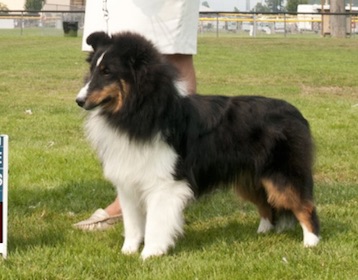 This is a true tricolor, primarily black with tan points (eyebrows, muzzle, generally around or on the front and back legs, and under the tail) and white.

There is also the black and white sheltie, or bi-black (bi meaning two), with no tan markings as pictured below. 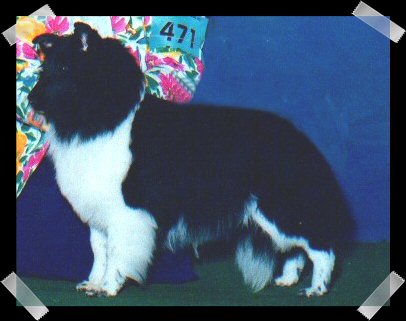 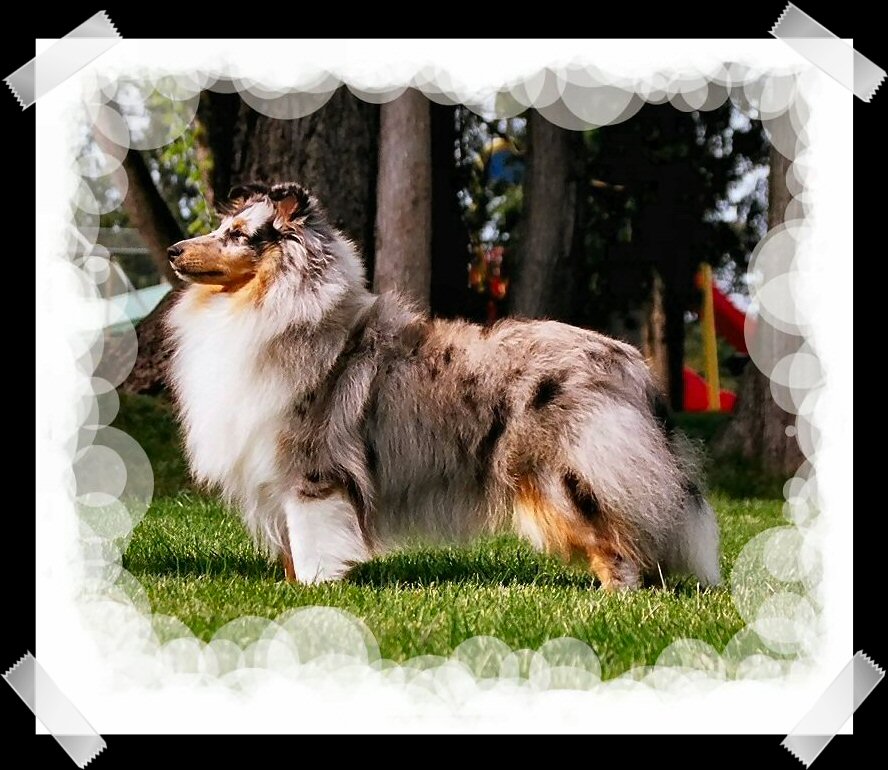 The Blue sheltie is actually a diluted black whose colour is primarily  blue/gray with darker blue to black merling throughout the coat.  The gray can vary from a light powder gray to a dark steel gray.  There are two types, a "blue merle" which has the tan points as a tricolor does as well as the white markings as shown above and the 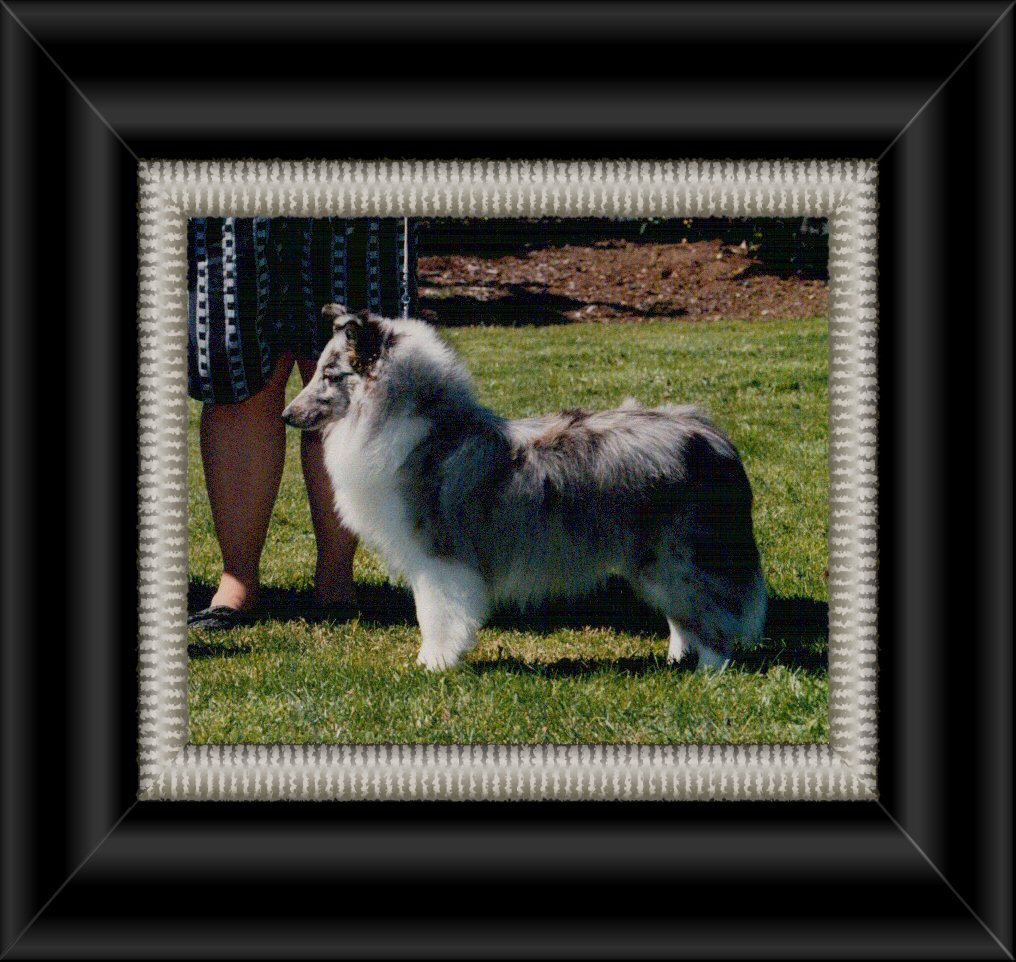 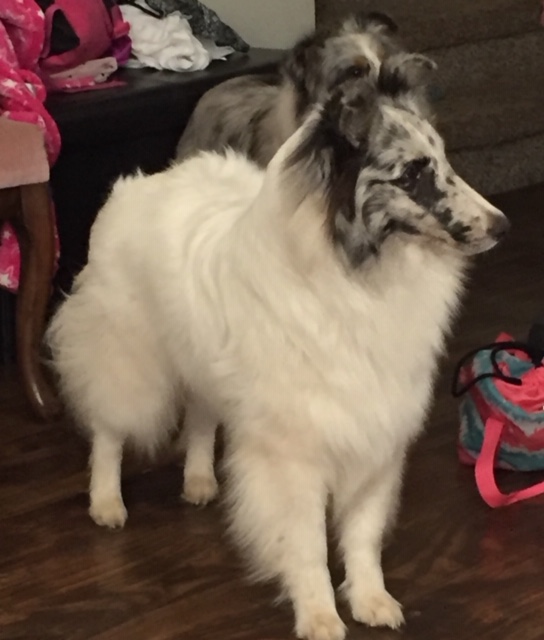 Color-headed whites, or CHW are completely normal and are a result of an extreme pattern white called "white factoring".  When two white factored dogs are bred together a CHW dog can result.  CHW are typically more than 50% white, and their heads are normally colored in whatever color shelties come in.  White factoring can be evident in some dogs by a white stifle as seen in the black dog above, but sometimes it is not as evident and a surprise can result! 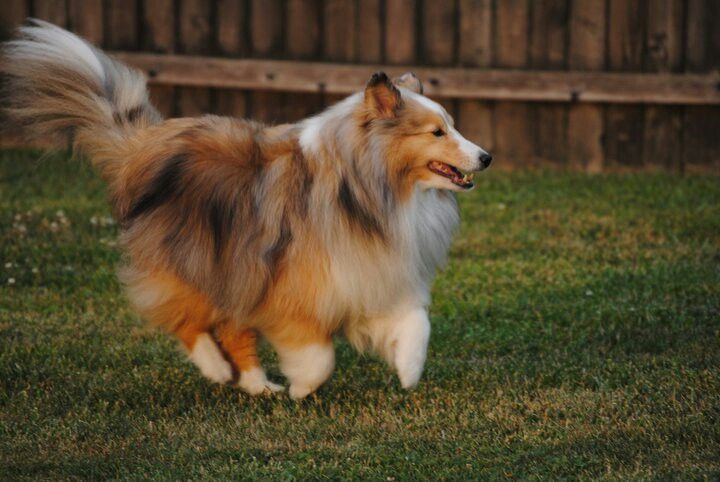 The sable merle is a result of breeding a sable to a blue merle.  They can be sometimes hard to distinguish from a sable or can be very obvious.  They are a sable with the darker brown merling as a blue merle has darker blue to black merling.  Sometimes very obvious, sometimes so muted as to not be detectible.  These ones are often mistaken for muted or pale sables and as puppies often have a "peachy" colour to their coat.  Sometimes they have grey tinges to the ear tip.  I have seen a sable merle that looked like a blue merle, but with sable shading here and there in the coat.  The heartbreak of this venture into breeding a sable with a blue is that you may get a drop dead gorgeous sable merle who in all intents and purposes looks like a light sable, but then you discover a brilliant blue eye! which of course will prevent this dog from being shown. 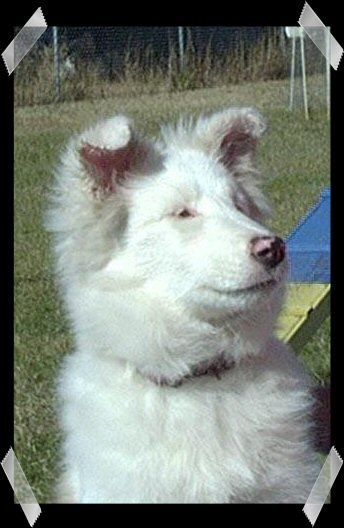 These colors are produced by breeding merle to merle, whether it be blue merles or sable merles.  They are actually diluted blues and sables to the point of being so washed out as to appear white.  Some have solid markings somewhere on their bodies but are generally very light.  Many are born with defects such as blindness, deafness or internal problems with heart, lungs and other organs.  For this reason we refer to these as having a "lethal" gene and many avoid doing a breeding such as this for the obvious reasons.  Puppies born of this combination may need to be euthanized because of these problems.  However, not all may be born with this lethal gene and may go on to perfectly normal in every way.  It is up to the individual breeder to decide if it is worth the risk.  It is not recommended  to be taken on lightly by a novice.  Thank you to the person who sent me this picture...regretfully, I saved the picture and deleted the email and cannot remember who sent it.  I hate this getting older!!!!!!